More than 80 Years in Harwich!

More than 80 Years in Harwich!

In 2019, Ellisons celebrated more than 80 years of being in Harwich. The Harwich office was the first branch office for Ellisons, outside of the Colchester head office, and it was the principal office on the Tendring Peninsula.

In the course of its lifetime, the office has witnessed some of the most significant events of the 20th Century. It was on the eve of the Second World War that this office was established in Dovercourt and flourished under the leadership of Lewis Crickmore. He went on to become the firm’s Senior Partner, ran the office from Kingsway, Dovercourt until his retirement in 1979. Ellisons & Co., as it was known then, bucked the trend of decline from war-related disruption under the expert guidance of David Papillon and Crickmore and acted for wealthy families in the region.

In 1978, solicitor Bryn Smart was brought in to overhaul the family focussed practice at Dovercourt and ‘whip them into shape’. In his six years as head of this branch, Bryn expanded the practice to develop a wealth of commercial work. Using key local business contacts, he brought in business from major shipping and transport companies to transform the practice into a much more commercial enterprise. Bryn was later appointed the firm’s Senior Partner from 2000-2006.

During the 1990s and early 2000s, Ellisons strengthened its position on the Tendring Peninsula. The firm of Darley Tudor came into the fold in 1994 adding a Frinton-on-Sea office to the existing branches of Colchester and Dovercourt. In 2008, further expansion came in the merger with PTL Solicitors, adding another Colchester office and one in Clacton-on-Sea.

Ellisons has maintained its presence on the Tendring Peninsula since the late 1930s and although the branches operate on a smaller scale, the pace of work is just as quick. The huge benefit of these locally based offices is that local clients do not have to travel far to receive expert advice.

As 2019 marks the 80th anniversary of the Harwich branch, we’ve much to thank Papillon and Crickmore for. To celebrate this momentous milestone, we invited colleagues (both past and present) and key clients to a drink’s reception at the Pier Hotel. 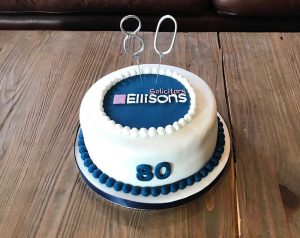 Managing Partner, Guy Longhurst said: “We are delighted to be celebrating such a momentous milestone in our firm’s history. Harwich and the Tendring Peninsula form a central core of our offering to local families and businesses in the Eastern region. The success of our offices in this region is down to the hard work of our teams in Harwich, Frinton-on-Sea and Clacton-on-Sea.”