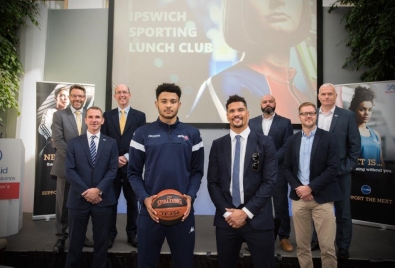 Ogogo, who won a bronze medal at the London 2012 Olympics, was guest of honour and headline speaker at an Ipswich Sporting Lunch Club event at Wherstead Park which Ellisonsn are proud to sponsor.

He said “To see so many members of the local business community come together with a shared ambition of helping young, local athletes to succeed is fantastic. I know first hand what a difference their support makes and, on behalf of the many, many athletes that SportsAid supports, I’d just like to say a big thank you to them all”.

The Ipswich Sporting Lunch Club was set up in January 2015 to raise money for SportsAid, the national charity for sports people, to enable them to support talented up and coming sportsmen and women from the county. SportsAid works with the governing bodies of 75 sporting disciplines, to ensure the right athletes get financial support and recognition at the right time.

Ogogo, also took the opportunity to present a SportsAid grant to 16-year-old basketball star Veron Eze from Ipswich. Eze is a Great Britain international and has recently returned from the European Championships where he helped GB to victories over Ireland, Luxembourg, Portugal, Sweden and Romania.

After receiving his grant Veron commented “I am so grateful to SportsAid for their support. It’s great to be recognised for what I have achieved so far. Ultimately, my ambition is to win a scholarship to play basketball in the United States and then play in the NBA. The funding I’ve received today will really help me with the costs of training and competing at the right level.”

The event is expected to have raised in excess of 10,000 for SportsAid with every penny going to support young sportsmen and women from Suffolk.